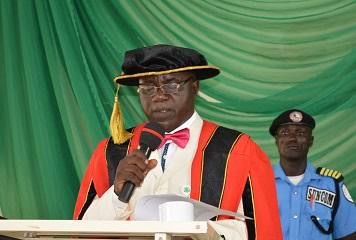 Oloyede, who was also the Vice Chancellor of Summit University, Offa, gave the advice on Tuesday, at a special event organised to mark his retirement from service upon clocking the age of 70.

The VC, who observed that the strike had caused irredeemable damage to the future of education in the country, said lobbying as instrument of negotiation is effective.

He explained that the union should have alternative strategies instead of employing strike which was detrimental to the education system of the country.

Oloyede, who had been a Faculty member at the Department of Biochemistry, University of Ilorin since his employment as a Graduate Assistant in 1977, said there were four critical stakeholders in the University system.

According to him, the stakeholders include the government, the students, the lecturers and parents and the common objective that binds them is quality university education for the Nigerian youths.

He, however, lamented that the objective had not been achieved because the government had consistently reneged on its own words.

The vice chancellor also advised lecturers to be exemplary before their students, to enable them fit into the role of mentors.

The don, who said no two students were alike, added that a good teacher or lecturer would not leave any of his students behind.

He listed such mentees to include nine professors in the university system and directors in research institutes.

Akanji added that Oloyede’s first Masters student in 1991 is the current vice chancellor of Federal University of Technology, Akure. (NAN)