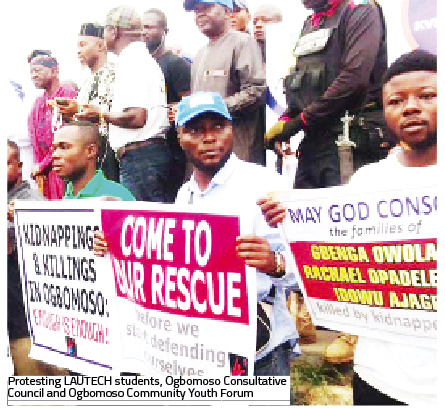 Students of the Ladoke Akintola University of Technology, Ogbomosho, Oyo State and other indigenes of the state have expressed worries over the spate of insecurity in the university community.

Shocked about the reported kidnap and killing of Rachael Opadele, a 500-Level student of the institution and her employer, Olugbenga Owolabi, in the month of July, the LAUTECH students urged the Oyo State Government to intensify efforts on security in the state.

Opadele and Owolabi were shot dead by their abductors after allegedly receiving N5 million ransom from their relatives.

Some students of the university living near the school environment were said to have moved their belongings out of their (private) halls of residence for fear of robbery attacks.

Most of the students are currently out of school in the light of the ongoing industrial action by the Academic Staff Union of Universities since February 14, 2022.

Following the killing of Opadele and Owolabi and the commercial motorcyclist who took the ransom to the kidnappers’ hideout, both the students and the enraged youths of the town staged a peaceful protest in which they asked the government, security agencies and other stakeholders to rise up to the task.

The President of LAUTECH Students’ Union, Anuoluwa Adeboye, described the incident as worrisome, saying, “It is pathetic that a country where we have the federal, state and local governments cannot provide the necessary security needed for the students and other residents.

“We are currently on ASUU strike and we have been out of school since February 14. We are not only nursing the anguish of being rendered idle, we are now being thrown into constant fear because of kidnappers.

“The incident happened at the hotel where Rachael was working at Aba in Ogbomosho, very close to the campus. She is a student of LAUTECH and her house is at Aba. As a student, she didn’t want to be idle. According to reports, the bandits came in the middle of the night and kidnapped Rachael, a 500 level student. It could have been more because we have two 400 Level students: Fortunate and Anuoluwa, who are also working in that hotel.

“After kidnapping the four of them that night, they returned Fortunate and Anuoluwa and went away with Rachael and the hotelier. It was unfortunate to hear that they killed her and others. They had demanded for the sum of N50 million but they later negotiated to N5 million”

“After kidnapping the four of them that night, they returned Fortunate and Anuoluwa and went away with Rachael and the hotelier. It was unfortunate to hear that they killed her and others. They had demanded for the sum of N50 million but they later negotiated to N5 million.

“Even before this incident, we had been crying out over the insecurity in Ogbomosho. To our surprise, officers from Orile Igan Police Station came to the school environment and were extorting our students instead of finding a way to rescue the victims.

“We are calling on security operatives to come to our aid. I can confirm to you that this would be the fifth kidnapping incident in Ogbomosho in the last two months. Those other ones that were previously kidnapped were released after paying ransom. Others didn’t involve the students of LAUTECH.

“The school management cares less about our plights, especially those of us living outside the school environment. We have been clamouring to the university management even before Rachael was kidnapped. We are also working hand in hand with security operatives.

“It’s unfortunate that we don’t have security around our school and it’s high time we had one. I met with the Deputy Commissioner of Police in the state recently and he told me their limitations and predicaments. It will shock you to know that there are 35,000 students in LAUTECH Ogbomosho and over 300,000 people in the town but the police told us that they only have less than 10 vehicles for operations.

“We advise every student to return to their parents since the strike is still on while we continue to appeal to the government to work on providing community policing and local vigilante.”

The National President of Federation of Ogbomoso Students Union, Oluwafemi Stephen Oyeniyi, said that the youths of Ogbomosho were already making efforts to tackle the problem of insecurity in the town.

Oyeniyi, a 400 Level student of Animal Production and Health, LAUTECH, said, “We have met with the DPO of Owode Police Station and we also met with the DSS, Ogbomosho North Local Government Area. Before now, we have been facing the challenges of robbery where our hostels had been burgled several times. In March and April, we arrested those disturbing and stealing from students. Now, our worry is kidnapping.”

A former union leader and postgraduate student in the institution, Oluwole Oladapo, accused governments at all levels of insensitivity to the plights of Nigerians, saying that the South-West Security Network codenamed Operation Amotekun had been politicised.

He said, “It is unfortunate that the government is insensitive. How many lives are we to lose especially during the ASUU strike? The students are already battered as their academic pursuits have been hindered and now, they are not even safe again.

“We have been calling for community policing but whenever I remember that Amotekun has been politicised in the South-West, I become more worried. This will have a backlash. That brings us back to the issue of restructuring. We need to restructure. I must not hide the fact that we are afraid.”