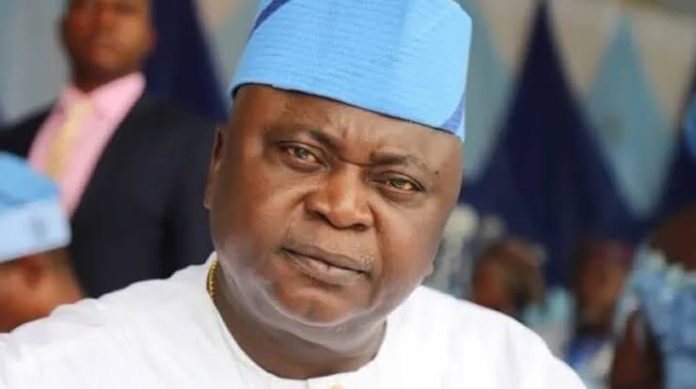 The crisis rocking the Ogun State chapter of the People’s Democratic Party deepened on Tuesday as it announced the suspension of its governorship aspirant, Ladi Adebutu.

They were all suspended on the ground that they acted in flagrant disobedience of the subsisting court judgement which produced the current executives of the party, thereby betraying the terms of settlement entered by the two warring factions in the state.

In a statement made available to newsmen in Abeokuta on Tuesday and co-signed by the Financial Secretary and Assistant State Treasurer of the party, Bola Odumosu and Mrs. Akibu Oriyomi respectively, the party said the suspended members were found guilty of contravening the terms of settlement entered in the consent judgement that birthed the current executives of the party in the state.

Aside that, they were also alleged to have connived with some unscrupulous elements within the party to manipulate the delegates’ list used in conducting the primary election of the party in Ogun State which consequently led to the multiple court judgements nullifying the party’s primary elections in the state.

The PDP said the ugly situation has led to the party not having candidates for the 2023 general election unless the courts come to the rescue of the party, saying this has never happened in the nearly 24 years of the party in Ogun State.

Part of the statement reads, “It is a known fact that the current executives of our party in Ogun State are a product of the consent judgement which was obtained after both parties (Adebutu & Kashamu factions) agreed to the terms of settlement. Clearly, a part of the judgement indicating security of tenure reads that, “The parties agree that persons nominated into positions in the Ogun State executive committee in pursuant to these terms of settlement SHALL NOT be REMOVED or SUSPENDED until the expiration of the term of the current Executive Committee of the PDP in Ogun State in April 2024.

“To our greatest surprise, some lawless individuals gathered themselves to announce the suspension of members in doing the bidding of their paymaster. This is totally against the position of the terms of settlement. Also, these bad eggs connived with an aspirant of the party to manipulate the delegates’ list used during the primary elections which led to the nullification of all the elections, leaving our party with no candidates as of now, despite the short period to election. This is absurd, senseless and unacceptable. We have never had it this bad in Ogun PDP. They will soon be cited for contempt of court having acted in flagrant disobedience of existing court judgments and orders.

“In the light of the foregoing and having been found culpable of acts capable of threatening the peace and unity of the party, Hon. Ladi Adebutu, Hon. Taiwo Akinlabi, Hon. Sunday Solarin, Mr. Akinloye Bankole & Arc. Kayode Adebayo are hereby suspended for a period of thirty (30) days. They are to appear before the State Disciplinary Committee of the party to explain why their suspension should not translate to expulsion on or before the expiration of the one-month suspension.”

Another governorship aspirant of the party, Jimi Lawal, was suspended last week for allegedly conducting and participating in an “illegal” governorship primary election.

The party which had been divided into three factions was asked to conduct a fresh primary within 14 days by a court which had lapsed.

The party suspended Lawal alongside four others who are: Bola Odunmosu, the financial secretary of the party, Fasiu Ajadi, Kola Akinyemi and Tope Asiru, the party chairman of Ijebu North-East Local Government Area for anti-party activities.

In a related development, a Federal High Court sitting in Port Harcourt has nullified the Primaries of the All Progressives Congress in Rivers State.

The court gave the decision on Tuesday in a suit brought before it by some aggrieved members of the party who had during the primaries of the party lamented exclusion.

It would recall that during the APC primaries that some members of the party had alleged exclusion and took protests to the state Secretariat of the party in Port Harcourt.

However, One George Orlu and four others who claimed to have purchased nomination forms had approached the court requesting that the primaries of APC in the state be nullified following their alleged exclusion in the process.

The court in its decision ruled that the persons were unlawfully excluded from the primaries.

Justice E.A. Obile, in his ruling held that the aggrieved persons were shut out of the primaries unlawfully, adding that the process amounted to nullity.

Obile in the judgment agreed with the plaintiffs that they were wrongly excluded in the process to participate in the party primaries.

He, therefore, ruled that all those elected from the primary stand nullified and should not be recognized as candidates.