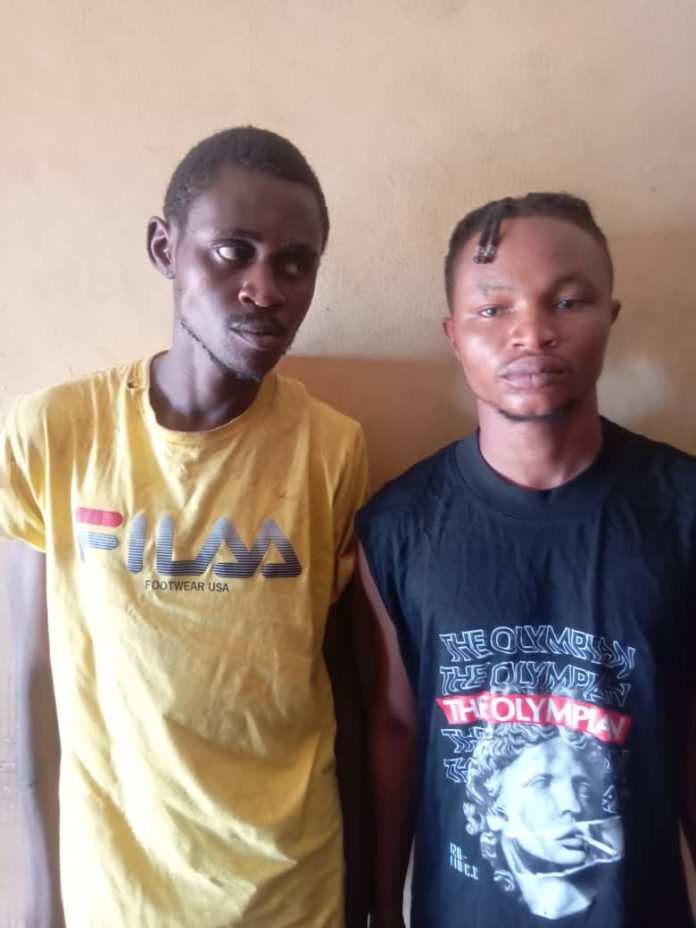 Men of Delta State Police Command have arrested four suspects for varying offences across the state.

According to a statement made available by the Command’s Public Relations Officer, DSP Bright Edafe, two of the suspects allegedly specialised in generating fake bank alerts to defraud operators of Point of Sales in the state.

The two male suspects, Ofemu Obus, 23 and Henry Ekpu, 28, would approach POS operators and pretend to make transactions by sending fake alerts to them in order to get money from the unsuspecting victims.

“The Command has arrested two suspects namely, Ofemu Obus ‘m’ age 23yrs and Henry Ekpu ‘m’ age 28yrs, the two suspects were arrested by Operatives attached to the Command’s Raiders squad on 27/10/2022, the suspects are alleged to specialize in defrauding unsuspecting POS operators by generating fake alerts which they use to deceive their victims and defraud them of their money. Suspects are in custody and the investigation is ongoing.”

“On the 26/10/2022 at about 1700hrs, operatives of Dragon patrol teams 29 and 26 led by an Assistant Superintendent of Police, while on stop and search duty along Warri-Sapele road by Okwuvo Okpe LGA, intercepted a Daylong motorcycle with Reg. No. Delta UGH 353 VQ carrying two male occupants.

“The Policemen conducted a search on them during which, one (1) Iphone, one (1) Infinix phone, one (1) Nokia torch phone. While the search was being conducted, the owners of the phones started calling, and they alleged that they were at Sapele and Oghara.

“The two suspects were later identified as John Francis, age 26 years of Uru-Ughelli Street Agbarho and Godsent Orogun, age 25 years of Number 18 Ovwiagba. Suspects are in custody while Investigation is ongoing.

“Acting on intelligence report about an armed robbery syndicate who operates around Awka-Enugu highway axis but hibernate in Asaba, at about 1145hrs of date, operatives of CP-Decoy squad acting on a tip off, mobilized to Oduke-Okwe axis of Asaba where the suspects who were driving a Toyota Sienna SUV with Reg. No. ASB 781 YF, upon sighting the Police, abandoned the said vehicle and took into the crowd at the market. Upon search of the vehicle, one locally Made Beretta Pistol, and a Samsung phone was recovered beneath the driver’s seat. Investigation is ongoing,” the statement read.