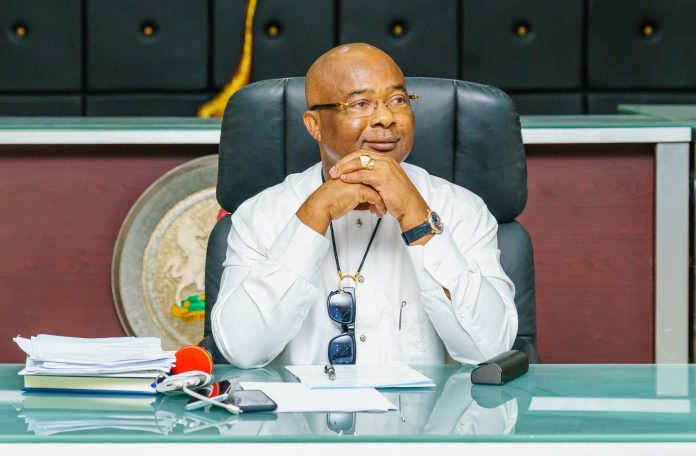 The prestigious award of excellence in public service in the area of transparency and open governance given to Governor Hope Uzodinma of Imo State has been generating encomia from Imo indigenes who have also shown open excitement over the honour done their Governor.

Governor Uzodimma was among the 44 awardees, including former President Goodluck Jonathan, President of the Senate, Ahmad Lawan, Speaker of the House of Representatives, Femi Gbajabiamila, and 15 other governors, who were honoured at the weekend at Abuja for their sterling performances in different spheres of development in the country while in office.

The award – Nigeria Excellence Award in Public Service was initiated by the Office of the Secretary to the Government of the Federation in collaboration with The Best Strategic Media.

Governor Uzodimma was given the rare award of excellence in transparency and open governance, amid 15 other brother Governors, an indication that his sermon on transparency and accountability, as the driving force of his 3-R mantra government that is anchored on Reconstruction, Rehabilitation and Recovery, has attracted the attention of critical government assessors.

An excited Chairman of the Board of Ben Uwajumogu College of Education Onicha Uboma, Eze Oliver Ohanweh said he was not surprised at the award because “Governor Uzodimma exemplifies selfless character and passion for humanity.”

While the Chairman of ALGON in Imo State, Willie Okoliogwo described Governor Uzodimma as ” the most conic Governor of the South East,” the Commissioner for Women Affairs and Vulnerable Group, Mrs. Nkechi Ugwu said the award was both earned and deserved. “Everyone knows of His Excellency’s dedication to a better Imo and posterity will be kind to him.”

The media community was not left out in pouring encomium on the Governor.

According to the Chairman of the Nigeria Union of Journalists Imo State Chapter, Chris Akaraonye, “this award justifies His Excellency’s wonderful achievements in Imo State, especially in road construction and rehabilitation.”

Yet, another prominent Imo indigene, a business mogul of note and the Duke of Owerre Nkworji, Beneth Nwokejiobi not only congratulated Governor Uzodimma and described the award as “most deserving,” he said he was not in doubt that “Imo people will be the ultimate beneficiary of Governor Uzodimma’s transparent, open, selfless and committed government.”

Perhaps, the view of the Chief Political Adviser/ Head of Political Bureau to the Governor, Enyinnaya Onuegbu summarizes the whole essence of the honour done the Governor.

Onuugbu said: “The commitment of an elected official to implementing due process in leadership guarantees the delivery of quality democracy dividends to the people, ensures a secure and happy society to the glory of God. Distinguished Senator Hope Uzodimma is simply an icon in leadership.”