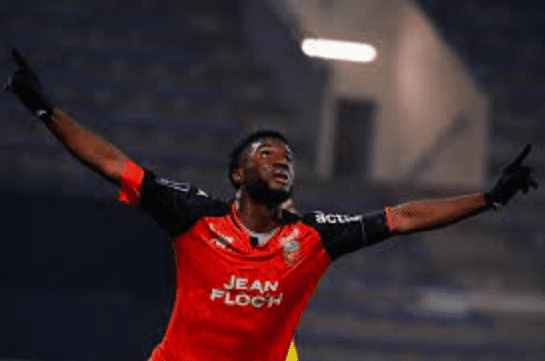 The race for the top scorer award in the French Ligue 1 is getting exciting with Lorient’s Nigeria international Terem Moffi one goal away from catching Paris Saint-Germain superstar Kylian Mbappe.

Moffi found the back of the net as Lorient suffered a 3-1 defeat at the hands of Marseille at the Stade Orange Vélodrome at the weekend.

The Nigerian international opened the scoring with a powerful volley in the 29th minute but two former Arsenal stars in Alexis Sánchez and Sead Kolašinac found the net to make it 2-1, before Veretout sealed Marseille’s win with a goal in the 59th minute.

In eighteen league appearances this season, Moffi has now scored 12 goals, one less than the leading marksman in the division with thirteen goals, Kylian Mbappe.

In the Serie A, Super Eagles striker Cyriel Dessers ended a five-game goal drought after getting on the scoresheet for Cremonese in their 3-2 loss to Monza at the Stadio Giovanni Zini.

Monza were running away with a win as they lead 3-0 after 55 minutes but Cremonese reduced the deficit through Daniel Ciofani with a header in the 67th minute and Dessers grabbed a second in the 83rd minute to set up a nervy end to the game.

The former Racing Genk striker has managed three goals in 16 matches since he began his Serie A adventure.