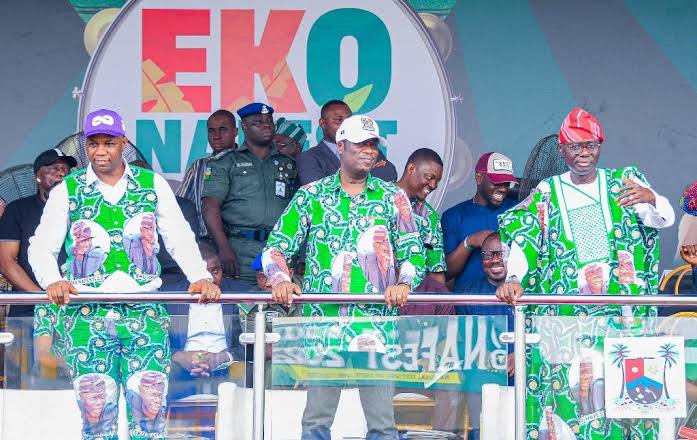 Lagos State, on Wednesday, became the convergence of Nigeria’s diversity and cultures. The State literally turned the centre stage for the exhibition of local customs, arts and traditions in what appeared to be the largest cultural carnival in the country.

An array of elegantly dressed troupes from 29 states of the federation kept the guests’ attention hooked to flamboyantly rehearsed pageantry, flaunting the nation’s rich cultural heritage in the full glare of local and international audience.

The contingents are participants in the week-long festival tagged “EKO-NAFEST 2022”.

Lagos became the fourth time host of NAFEST, a cultural fiesta initiated in 1970 to foster national integration, strengthen understanding and unity among diverse ethnic groups and promote the peaceful co-existence.

The event will feature various competitions and non-competitive activities, including excursion trips to various tourist sites in the host city.

Governor Babajide Sanwo-Olu declared the fiesta opened, charging the participants and audience to exhibit “true spirit of Lagos”, which he explained to be the State’s “accommodating nature” towards visitors.

Sanwo-Olu said Lagos Government accepted the event’s hosting right in demonstration of its love for cultural advancement and promotion of togetherness.

As melting pot of culture and hub of commerce, the Governor said Lagos would continue to export the nation’s rich heritage and entertainment to the global market, thereby attracting foreign investment into the local creative and entertainment sector.

He said: “Lagos State Government is proud to be hosting NAFEST for the fourth time, having hosted the first edition in 1970. The foundational objectives of the festival is in line with our administration’s goals for the promotion of entertainment and tourism, which are a key pillar of the T.H.E.M.E.S Agenda. We are deliberate about promoting every aspect of tourism, arts and culture, which is why we make it a practice to support, partner and collaborate in activities that would further strengthen our cultural heritage and promote our unity in diversity.

“For the next seven days, delegates from the states across the federation will be showcasing and celebrating our country’s cultural heterogeneity. As headquarters of entertainment and foremost commercial nerve centre of Africa, Lagos will continue to represent our country globally in creativity, music, films and culture. As a State, we are committed to supporting local talents and help them to export their creative ideas to the global market where they can exchange them for values.”

Sanwo-Olu re-echoed the need to use the cultural platform to engender peaceful co-existence and promote unity. He told the cultural troupes to eschew issues that that promote division and stoke tension.

As 2023 general elections draw close, the Governor urged the participants to use the opportunity to support leaders that would leverage the multi-cultural heritage and language to unify the country and bring back the spirit of togetherness among all citizens.

Rather than allowing differences in language and culture to divide them, Sanwo-Olu told participants to see the diversity as resources to be developed for collective advantage.

He said: “We are in the campaign season as our nation’s general elections has been scheduled to hold within the first quarter of next year. As political office holders continue to engage the electorate at this period, it is important to re-echo the message of unity and peaceful co-existence which NAFEST platform provides.

While we celebrate the Nigerian heritage and cultural diversity here today, my clarion call is that we take this an opportunity to elect leaders who will recognize and take advantage of our rich, multi-cultural heritage and language to unify us as a people and as a nation which was the intention of our founding fathers.”

Commissioner for Tourism, Arts and Culture, Mrs. Uzamat Akinbile-Yussuf, advised the cultural to use the opportunity of the festival to explore the tourism sites in different parts of Lagos, especially the waterway transportation system being developed by the State Government.

She said peaceful co-existence remained the catalyst for national development, urging the delegates to engage in dialogue and activities that would guarantee the peace throughout the period of the event.

NCAC Director General, Segun Runsewe, expressed appreciation of the Council to Governor Sanwo-Olu and members of the Local Organising Committee for putting necessary facilities and logistic arrangements in place for the hosting of the event.

He said: The contents of EKO-NAFEST 2022 have been deliberately drawn to reflect and resonate the importance of peace across our nation. The event also emphasises the need to mobilise our collective conscience to fully embrace our diversity in the interest of progress and prosperity.”