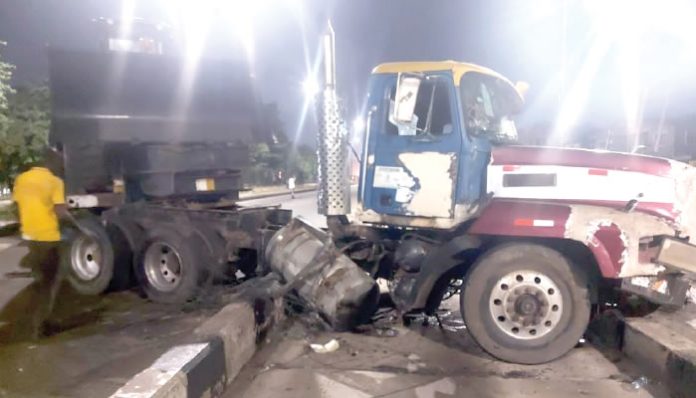 Three persons, in the early hours of Sunday, lost their lives in Obada area of Abeokuta, the Ogun State capital, when a truck crushed a taxi.

The incident, according to information from officers of the Federal Road Safety Corps happened at about 07:15 AM, after Obada police station, along the Lagos-Abeokuta highway.

The spokesperson of the Corps in Ogun State, Florence Okpe, who confirmed the incident, said five male adults were involved in the crash.

“Two persons sustained injury and unfortunately, three persons were killed. The suspected cause of the crash was route violation on the part of the Truck driver as it collided with the Nissan car,” she said.

She further confirmed that the injured victims were taken to a General hospital in Abeokuta for medical attention, while the bodies of the deceased victims were deposited at the same hospital’s morgue.

Meanwhile, the Ogun FRSC Sector Commander, Ahmed Umar, while commiserating with the families of the crash victims, advised motorists to avoid route violation completely.
Umar added that safety is everybody’s business, especially in this season of high vehicular movement, stating that, “Everyone should drive cautiously and obey traffic rules and regulations.”