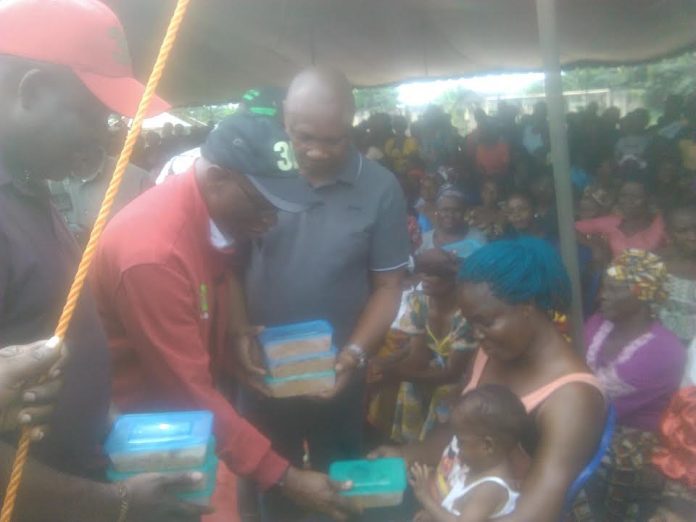 Reprieve came the way of flood-ravaged victims in Egbema and Oguta local government areas of Imo State at the weekend as Governor Hope Uzodimma handed over to them different items that will help to cushion the effect of the natural disaster.

Hundreds of the internally displaced persons whose homes and farms were submerged by flood as a result of the overflowing of Oguta lake and other rivers in Egbema and Oguta Local Government Areas of Imo State received relief materials, including food items from the State government to help cushion the hardship that had arisen from the natural disaster.

The relief materials were: 400 bags of 50kg rice, mattresses, pillows, blankets, cartons of indomie noodles, water packs, Jerry Cans, among others as well as a hot meal of rice which was served to the victims at the Camp where they were temporarily housed.

The government also promised to provide the victims with at least one hot meal every day for the next two weeks.

Addressing the victims at the various camps at Abacheke in Egbema and Oguta Girls Primary School respectfully, Governor Uzodimma regretted that the unfortunate situation, caused by a natural disaster, occurred at a time of serious economic recession.

Governor Uzodimma who was represented by the Deputy Governor, Placid Njoku, sympathized with the victims and assured them that the government will stand by them throughout the challenging period.

He said everything possible would be done to alleviate their suffering, including seeking assistance from the National Emergency Management Agency.

Governor Uzodimma charged the leadership of Egbema and Oguta local government areas to ensure that the relief items are distributed to those they were meant for, and warned that they will be held accountable for any lapses.

The Governor further reassured the people that the Federal Government’s approval for the dredging of the Oguta lake and Orashi river would go a long way in mitigating the effects of disasters caused by flood in addition to bringing economic boost to the area.

Addressing his kit and kin at Abacheke, the Minister of Education State, Goodluck Nana Opiah thanked the Governor and the government of Imo State for coming to the rescue of his people when it mattered most.

He however requested the governor to appeal to the oil companies operating in their areas to see reason to come and assist the people at a time like this, “a time of need.”

Opiah used the opportunity to inform his people that “Governor Uzodimma single-handedly nominated and recommended” him to the President to be made a Minister and requested them to join him in thanking him so much.

In his speech, the Managing Director and Chief Executive Officer of Imo State Oil Producing Development Commission, Charles Orie said that “it is as a result of the Governor’s passion for the people of Ohaji/Egbema and Oguta that he approved that the various materials and food items be sent to them without delay.”

Orie enumerated the items, promising that the “palliatives and other assistance will continue to be provided until your lives must have improved substantially.”

Some of the leaders who spoke at the occasion such as the APC House of Representatives candidate for the area, Eugene Dibiagwu and the Sole Administrators of the two LGAs – O. Amadioha and Ofili Ijoma – lamented the devastation brought about by the flood to farmlands, property and homes of the people and appreciated the government for bringing succour to the victims.

They however appealed for more assistance and relief items for other communities – Opuma in Egbema, Ezi-Orsu, Osemoto, Egbuoma all in Oguta, among others in the two Local Government Areas.

Some of the internally displaced persons who decried the devastation to their farmlands and loss of crops noted that the latest incident was the worst they have experienced in recent times, since the 2012 and 2016 flood disasters.

It was on that note that one of them, Mrs. Okwudili Okechukwu expressed her heartfelt appreciation to the government for timely intervention with the relief items.

Also, Ochije Uzoma Bernard while thanking God that they survived the flood lauded Governor Uzodimma for coming to their assistance.

The Deputy Governor was accompanied by the Chief of Staff to the Governor, Nnamdi Anyaehie, the Commissioner for Environment, Emma Duru, the Deputy Chief of Staff, Emeka Agbo, among other government functionaries and appointees.