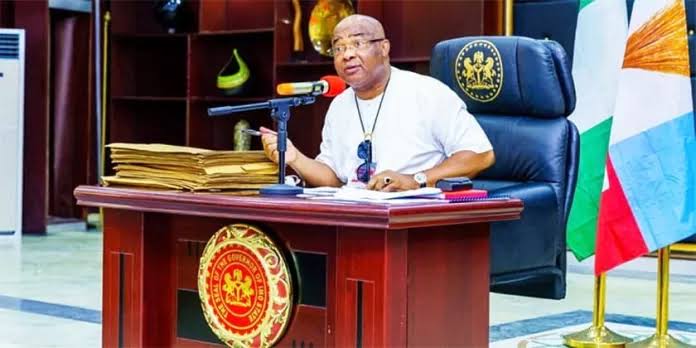 Governor Hope Uzodimma on Wednesday began a sensitisation visit to all the 27 local government areas of Imo State as the elections next month draw closer, donating 27 brand new Hilux vehicles to security agencies in the state as a way of enhancing the collection of PVCs by the electorate at the Independent National Electoral Commission centres.

The 27 vehicles were handed over to the Imo State Commissioner of Police, Mohammed Barde, on behalf of the combined team of security agencies by Governor Uzodimma before he set out for the sensitisation visit to Oru West and Oguta respectively.

The brand new Hilux vehicles given to the combined team of security agencies to enable them oversee collection of PVCs at designated centres across the state are part of the State’s Crime fighting outfit, “Operation Search and Flush.”

Making the presentation at the government House, the Governor said: “The action is a deliberate effort aimed at strengthening the efforts of the Security Agencies to occupy the political space and ensure the next election in the State is hitch free.”

The Governor told the security operatives to “deploy the vehicles to help INEC in the successful distribution of PVCs because it will be bad for our people, after suffering to register, are not allowed to collect their PVCs for voting.”

He thanked the security agencies for being available always and enthusiastic to collect the vehicles for the assignment and reiterated his determination to support them to do their work in Imo State.

The Governor reminded the operatives that the team is under the control of the Commissioner of Police in Imo State and requested Barde to ensure that his men “go out and do the work professionally and in accordance with the rules of engagement.”

In his remarks, the Imo State Commissioner for Homeland Security and Vigilance Services, Ugorji O. Ugorji, thanked the Governor for all his assistance and support to the security agencies in the State which he said “have given the State the peace we enjoy today.”

On behalf of the Search and Flush Unit, Barde expressed gratitude to the governor and promised that “the vehicles will be appropriately deployed to help Imo citizens collect their PVCs and go out to vote at the elections.”

During the visits, the governor had the opportunity of listening to the Sole Administrators of the Councils – Willie Okoliogwo (Oru West) and Ofili Ijeoma (Oguta) reel out their areas of strength and weaknesses, and the readiness of their Councils for the elections next month.

The Sole Administrators of the Councils also used the opportunity to thank the governor for the numerous developmental projects he brought to their areas.

In his remarks, the Governor urged the people from the affected Councils to reconcile themselves and work as a team to deliver all the candidates from their area in the coming elections.

Besides, Governor Uzodimma seized the opportunity to decry the spate of insecurity in the state, and as it affects the local government areas, and urged the people to be part of efforts by the government to tame the monster and secure the state.

The governor also urged the people to vote for all the APC candidates in the elections next month.

All the candidates did not only thanked Governor Uzodimma for his efforts in rescuing and repositioning Imo State but for giving them what to use to market themselves.