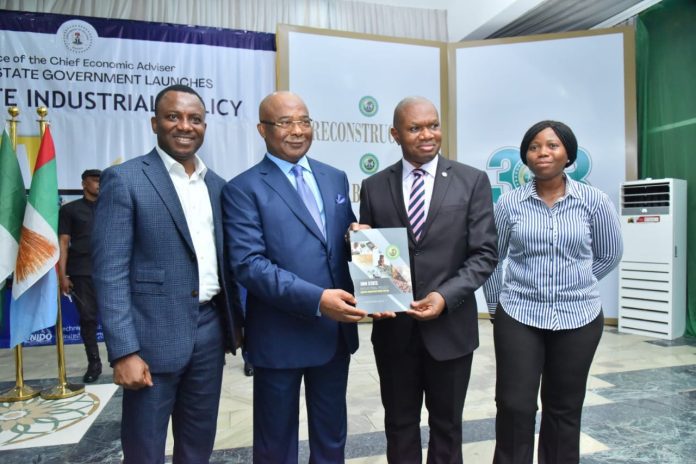 Governor Hope Uzodimma of Imo State has launched the Imo Industrial Policy, with a promise that the state is now ready for national and international economic businesses that go with industrialisation.

Performing the ceremony at the Sam Mbakwe Exco Chambers Government House Owerri on Wednesday, November 2, 2022, the Governor said the Industrial Policy would “serve as the State’s strategic master plan to stimulate the growth and development of all sectors of the economy of Imo State, identify and prioritize the low hanging fruits for immediate harvesting.”

He said the Government set out to identify all the economic potentials where Imo State has comparative advantage with the aim of clearly outlining how the potentials can be harnessed into going enterprises in the form of countless small and medium scale enterprises.

The Governor used the auspicious occasion to call on investors to take advantage of the robust and friendly investment climate that his administration has deliberately put in place, to invest in different areas of the economy in Imo State, particularly in digital economy, agro industry, tourism, oil and gas, mining, fabrication and in the allied industry that will be thrown up from the Imo State Green Revolution Initiative.

He described the launching of the Imo Industrial Policy as yet “another audacious step in Imo State government’s determination to put the State firmly on the road to economic growth and prosperity.”

Furthermore, the Governor recalled that the recently flagged-off Hope Green Revolution Project is an economic stimulus plan that buys into the investment opportunities presented by climate change to promote enterprise and investment in the State.

“That singular initiative has already guaranteed a foreign direct investment of $10billion to Imo State. Both programmes are evidences that Imo State is irreversibly matching on a well-laid out road map towards industrialization and economic growth.”

Governor Uzodimma expressed gladness that the Industrial Policy has been distilled from the inputs made by stakeholders at a meeting convened by the government for the purpose. He said he expressed no doubt that the policy must have taken full cognizance of the different sectors of the economy where Imo State has comparative advantage and as a result, “will reflect the priority industrial needs of Imo people from all geo-political perspectives.”

The Governor added that “the Industrial Policy is to offer fresh, pragmatic and actionable insights into the State’s thinking and approach to industrialization whose ultimate ambition is to place Imo on the part to long term renaissance where the policy is a long term sustainable initiative which will outlive this administration.”

He added that the 3R administration wants to, through the Industrial Policy, “provide the fillip to derive the economic rejuvenation of the State that will emphasize the provision of an enabling environment for the flourishing of Imo economy.”

The Governor reminded the audience that no nation or State can derive a successful Industrial Policy without the supporting infrastructure. “That is why this administration has been proactive in the construction and reconstruction of more than 100 roads in the State in addition to the newly dualised Owerri/Orlu road and Owerri/Okigwe roads to stimulate the economic growth through infrastructural development.”

Apart from road infrastructure, he said his administration has ensured that the ease of doing business in Imo State is top-notch. “This is in addition to the creation of the Ministry of Digital Economy and E-Governance and automation of the Civil Service to handle all kinds of transactions within the oasis.”

The Governor emphasized that the goal for a viable Industrial Policy is to ensure that Imo youths are offered employment in the many business concerns that will spring up as a result of the policy.

He recalled that Imo State has been doing a lot to empower Imo Youths economically, noting that at the last count, more than 18,000 youths have been trained and empowered by his government to run their businesses and even be able to employ others.

He also called attention to the target of 40,000 jobs that will come after the revamping of Adapalm Nigerian Limited and the effort of his administration to bring back to life the Imo Standard Shoe Industry and the Avutu Poultry, to boost the economy of the State.

Governor Uzodimma said: “We are determined to grow our economy working with the private sector through Public Private Partnership (PPP).”

He then reasoned that the launching of the Imo Industrial Policy is not just an initiative to drive the economy of the State but also a plan that will guarantee the future of our youths, prolong lives and guarantee prosperity. “I will do all that is necessary to ensure its success.”

The Governor said Imo State is set to become one of the top Industrial Hubs of not just in South East of Nigeria, but the entire Nation with a faithful implementation of the policy, given enabling policies already in place.

He assured that his administration will strengthen and support Imo Investment and Promotion Agency, the ministry of Commerce and Industry, to fast-track all applications for investments in Imo State.

In his presentation, the Director General Imo State Investment Promotion Agency, Jude Nzeako said the policy will among other things be a road map to strategic Industrial and economic investment of the State. He said it will enable the Government intervene in the areas of comparative advantage, stimulate the interest in the Local Government Areas on discovery of natural resources in such areas, and bring and collate other interests on economic development together.

Nzeako emphasized that the Industrial Policy will move Imo State away from a consumer State to a productive State, noting that the State is set to change her Industrial narrative.

But he advised for the political will to sustain the initiative.

In his remarks earlier, the Chief Economic Adviser to the Governor, Kenneth Amaeshi said what the Industrial Policy requires most is political will like that of the Governor as well as policy based on pragmatism.

For him, “the Policy will create jobs, companies will come to establish and invest in Imo State and with the sustainable potentials resulting from the abundant local natural resources of oil and gas, mines and agriculture and others the sky will be the limit of Imo State in achieving the industrial Policy.”

Earlier the Regional Director of UNIDO in Nigeria, Bankole Jean congratulated the Governor for the initiative and acknowledged that it is the first time he has seen an inclusive policy that even involves Heads of Intelligence and Security Agencies.

On their part as a foreign partner, he promised to assist in mobilizing investors to the State and even economic funds lying waste in other countries for the development of the economy of the State. “This is in addition to support on capacity building and consultancy.”

Present at the Launch were the Deputy Governor, Placid Njoku, the Speaker Imo State House of Assembly, Emeka Nduka, the Secretary to the State Government, Cosmas Iwu, member of the State Executive Council, Chairman Imo State Elders Council, Eze (Dr.) Cletus Ilomuanya, members of the Business Community among others.