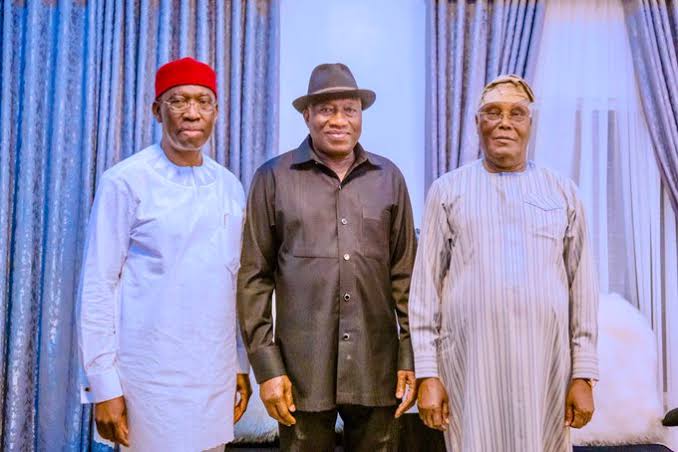 Presidential candidate of the Peoples Democratic Party, Atiku Abubakar and his running mate, Ifeanyi Okowa, on Thursday night, met with former President, Goodluck Jonathan at his residence in Abuja.

Posting photos from the event on his Twitter handle on Friday, Okowa disclosed that the discussion with the former president was about how to actualise plans recover power from the ruling All Progressives Congress.

Okowa accompanied the pictures with a caption, saying: “Last night, alongside our Presidential Candidate, Alhaji @Atiku Abubakar, we had a great meeting with our former President, H.E. @GEJonathan. There, we discussed our plans to #RecoverNigeria with His Excellency.”

The Point recalls that there has been speculation that Goodluck Jonathan had been asked to dialogue with aggrieved members of the party who insist that the PDP national chairman, Iyorchia Ayu resigns from his position.

Although the PDP’s presidential candidate is yet to share details of the meeting, Atiku believed to be soliciting the support of Jonathan to actualise his ambition of replacing President Muhammadu Buhari as president in 2023.