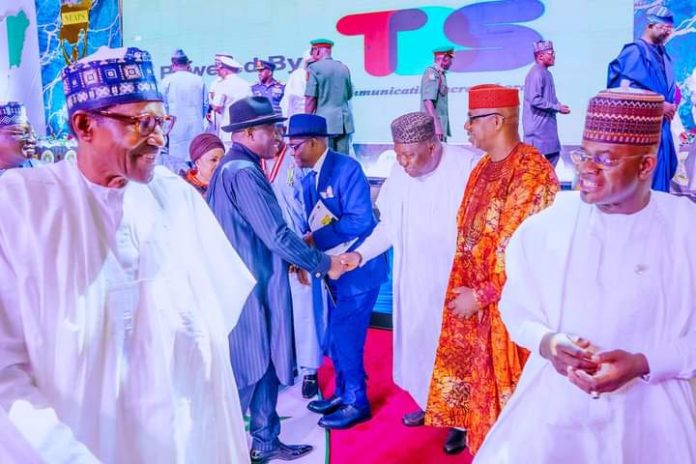 President Muhammadu Buhari on Friday in Abuja said leaders in the private and public sectors should be more mindful of their positions as “trustees of the people”, urging them to always work towards leaving a legacy that will be long remembered.

“I wish that leaders will arise and stand up to be counted among leaders who have distinguished themselves to do the right thing and leave their footprints on the sands of time,’’ he stated.

Speaking at the Nigeria Excellence Awards in Public Service held at the Conference Centre in the State House, President Buhari commended the 44 recipients of the awards, which include former President, Goodluck Jonathan.

“Today, I am happy to have the opportunity to recognize 44 persons and organizations who have distinguished themselves across many sectors of the government and indeed, the economy.

“I am particularly happy to recognize His Excellency, Dr. Goodluck Ebele Jonathan, GCFR, my predecessor for his contribution to peace building from the Niger-Delta region, which has snowballed into peace in the region and now, around the world. Since leaving office, he has deployed his rich experience to ensure peace in many parts of Africa and has led mediation talks in several parts of the globe.

“I want to also specially recognize Abdul Samad Rabiu, the Chairman of BUA International Limited for his interventions in Education through the BUA Foundation, the Abdul Samad Rabiu Africa Initiative (ASR Africa), and his personal philanthropic initiative. This initiative funds tertiary education institutions in Nigeria from its yearly $100million ASR Africa Fund for Social Development and Renewal. I am happy that five (5) Universities have so far benefited with many more to come,’’ he said.

The President urged public servants to make accountability and integrity their watchwords.

“I am equally elated to have some State Governors and my Ministers receive this award. This is to put on record that this award is born out of empirical evidence of performance and not politics. This award is recognition of the giant strides you all have made towards the transformation of Nigeria and you have consistently put hard work and dedication at the center of your initiatives.

“Let me use this opportunity to say ‘Thank You’ for your contributions to the transformation of our country. This award is a validation of your approach, but much more as a motivation for you and other upcoming leaders to continue doing more towards the attainment of a better Nigeria in all sectors of the economy,’’ he added.

While thanking organizers of the event, The Best Strategic Media, led by Ms. Mariam Mohammed, a Publisher and Public Relations expert, for the continuous support of his administration, President Buhari said the initiative was commendable “for deploying one of the best indices to determine the level of performance of Public Officers.’’

“I know that Public Officers will be challenged to perform above board now that they know they are being monitored by the people,’’ the President noted.

President Buhari said he was delighted that the maiden edition of the Nigeria Excellence Awards in Public Service was a private-sector initiative, organized by The Best Strategic Media in collaboration with the Office of the Secretary to the Government of the Federation to recognize excellent service delivery.

According to him: “Public Service is a public trust where officers and even employees must be accountable to the people whom they should serve at all times with utmost responsibility, integrity, loyalty, and efficiency. They are expected to act with patriotism and think out of the box in order to solve the many problems facing the people they lead.

“At present, issues of corruption continue to affect the civil services in many countries, around the world. Several reasons for these issues still exist because of deeply rooted problems like nepotism, cronyism, political patronage as well as lack of transparency and accountability. These vices distract them from delivering on their mandate and aspirations.

“The unsystematic enforcement of law and institutional mechanisms for holding civil servants and public officials accountable for their actions will always lead to a negative impression to the citizens.”

In his remarks, the former President, Jonathan, who received an Award for Peace Building, thanked the President for always making out time to encourage initiatives that recognize the contributions of individuals and institutions to nation-building.

“On behalf of all those that have received awards, I wish to say a very big thank you to the President and organizers,’’ Jonathan said.

Describing the event as unique, the former President assured that the awards will serve as an impetus for more service to the nation and humanity.

The Secretary to the Government of the Federation, Boss Mustapha, said the entire event was “purely a private sector driven initiative’’ that would be encouraged to become an annual event, based on acceptance.

The SGF said the award was a scorecard of the administration of President Buhari, and other leaders in the country, as it reflected different interests and political persuasions.