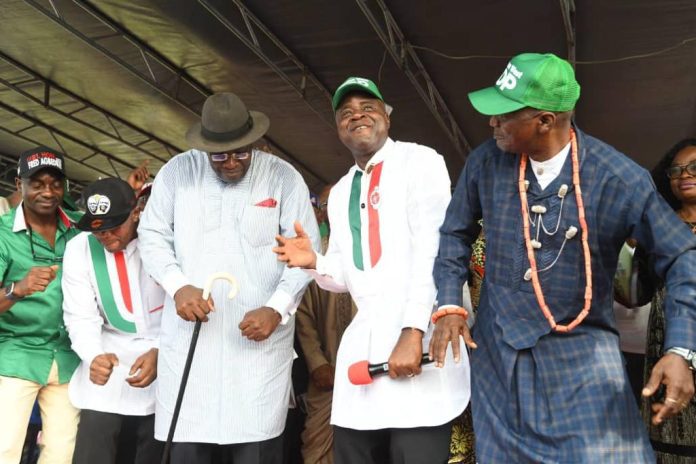 Bayelsa State Governor, Senator Douye Diri, has kicked off the state’s chapter of the Peoples Democratic Party campaigns for the 2023 elections in the Bayelsa West Senatorial District.

Speaking in Sagbama, yesterday, when he presented flags to the PDP candidates, including Senator Seriake Dickson representing Bayelsa West Senatorial District, House of Representatives member, Fred Agbedi (Sagbama/Ekeremor Federal Constituency), Governor Diri described Bayelsa West as the bedrock of the PDP in the state and that he is sure the party will emerge victorious in all elections in the state.

He said the PDP had the best candidates in the elections given their track record of achievements and urged the people of Bayelsa West to vote for the party to continue enjoying effective representation.

The governor noted that the zone was privileged to have two ranking members of the National Assembly in Senator Dickson and Hon. Agbedi, saying their re-election would usher in good tidings for the people of the area.

Diri also appealed to the people of the state to vote for the PDP’s presidential candidate, Atiku Abubakar, to right the wrongs of the current government of the All Progressives Congress.

“You have always supported us and we know you will do the same again. For the upcoming elections, we trust that you will deliver the PDP as you have always done. We have the best candidates.

“We are a lucky senatorial district returning two ranking members. So as we work with them, we are sure of producing something huge from the National Assembly.

“You have made no mistake nominating them to represent us at the National Assembly again. The same applies to our state assembly members.

“Unity is important as there is nothing like it. Let us imbibe the spirit of forgiveness. We will do our best but the battle is of the Lord.

“The entire country is feeling the misrule of the APC. So, support our presidential candidate, who is eminently qualified. We know Sagbama-Ekeremor is a no-go area for other parties.”

Also, the Deputy Governor, Senator Lawrence Ewhrudjakpo, lauded the campaign council for mobilizing members of the party for the flag-off event despite the short notice.

He said the PDP was poised to win the elections in the state and assured the people of Bayelsa West that the party will not let them down.

Receiving his flag as the PDP candidate, Senator Seriake Dickson, who is the immediate past governor of the state, remarked that Bayelsa West was home to the PDP and expressed confidence that the party will emerge victorious in the election.

While thanking supporters of the party for turning out in large numbers, he stressed the need for members to respect the leadership of the party and shun rumour-mongering.

In their remarks, Bayelsa West PDP Vice Chairman, Michael Magbisa, and the Director-General, PDP Bayelsa West Campaign Council, Fyneman Wilson, expressed optimism that victory was sure for the party in the general election.

In his remarks, state chairman of the party, Solomon Agwana, said the PDP was united in Bayelsa and urged its supporters to vote for the party and be prepared to protect their votes.

The highpoint of the event was the presentation of flags to other candidates of the party in Sagbama and Ekeremor local government areas.