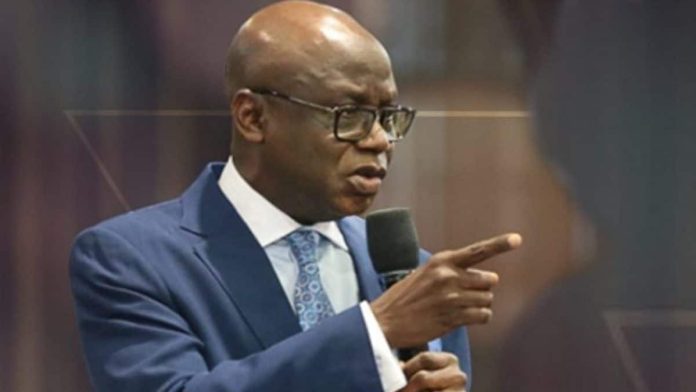 Bakare, who doubles as the Convener, Save Nigeria Group, stated this during his State of the Nation address, which also doubled as his New Year message, at the church headquarters in Lagos.

The theme of the address was: “Bridging the Gap between Politics and Governance.”

Bakare paid tribute to the nation’s fallen heroes for the supreme sacrifice which they paid to ensure Nigeria’s unity.

He also commended the military officers on field for their gallantry in the fight against terrorism and other forms of criminality in the country.

The former presidential aspirant on the platform of All Progressives Congress said that Nigeria was going into the forthcoming elections with issues that had posed challenges to it.

According to him, the emergence of the three major presidential candidates from the three major ethnic nationalities in the country speaks volume of how God will shine His light in the middle of pervading darkness to make a new Nigeria.

“The election is coming 30 years after the aborted June 12 elections and this will serve as a reminder of a generational change of some sort.
“God has come out in His full majesty to re-engineer Nigeria to a new one that people will be proud of once again. The time is up for divisive leaders who are preying on the country,” he said.

The cleric, who spoke about the possibility of some politicians attempting to manipulate the forthcoming elections, called on Nigerians to guard against vote buying.

He, however, expressed happiness that none of the presidential candidates had military background, saying that this was a plus to the nation’s democracy.

Bakare urged Nigerians to cast their votes based on personality rather than on sentiments, adding that the difference between politics and governance was in the delivery of services for the common good.

While praying for the good of Nigeria, he named the forthcoming general elections as “Nigeria wins.”

Bakare also warned against the politics of entitlement, describing it as bad politics.

The preacher also made reference to the Yoruba word, ‘Emi lokan”, meaning it is my turn. Emi lokan became a popular term after Tinubu used it to canvass votes in Abeokuta, Ogun State capital, in the buildup to the APC Presidential primary, which Bakare contested but lost.

“Bakare urged Nigerians to cast their votes based on personality rather than on sentiments, adding that the difference between politics and governance was in the delivery of services for the common good”

The cleric said politicians with a sense of entitlement evade political debate and fail to address Nigerians they seek to serve.

He also asked Nigerians to reject vote buyers in the 2023 election and called for entrenchment of good politics which focuses on issues of development.

“This ‘emi lo kan’ politics that insists on one’s turn, even if circumstances do not align, is bad. Politics of entitlement also manifests as perennial candidacy, not with the intent to serve, but to gratify long personal ambitions. It could also manifest as insistence on a given political office as a reward for what one considers a lifetime of sacrifice to the nation. Politicians with a sense of entitlement evade political debates and do not consider it imperative to communicate with the electorate.”

“Entitlement politics will breed an imperial presidency that is distant from the people and has no sense of responsibility or accountability to the people. Such imperial governance will slide towards dictatorship and will be intolerant of dissent.

“Entitlement politicians set low performance benchmarks for themselves when they secure power and are content with projecting molehills as mountains of achievement. Good Politics, Good Governance, Fellow Nigerians, having completed our analysis of bad politics and the bad governance it outputs, let us now take a look at good politics and its output of good governance. Good politics is pragmatic politics in the interest of the people.

“Politicians who practice good politics talk to the people they intend to govern; by communicating, they allay fears, restore hope, and assure the citizens. It is engaging and interactive: The practitioners of good politics are open to interrogation and they do not avoid debates or evade difficult questions. It is inclusive: good politics gives a sense of belonging to historically excluded or vulnerable groups, including women, young people, the elderly, and persons living with disabilities,” he said.