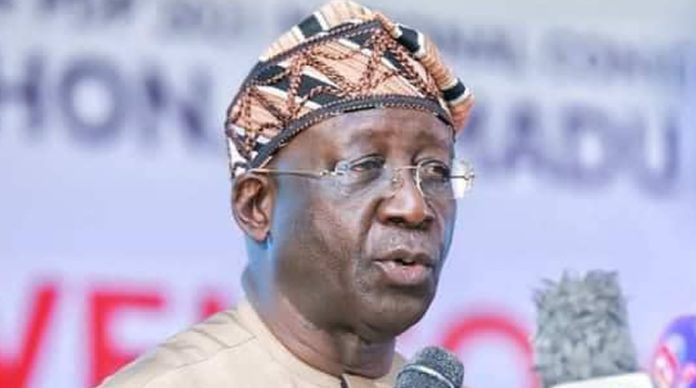 As a member of the People’s Democratic Party (PDP) at its formative stage in 1998, I make bold to say that after the registration of the party by INEC, it was glaring that it was the only political party with national outlook. The other two dominant political parties – Alliance for Democracy (AD) and All Nigeria People’s Party (ANPP) were regional parties.

The former was formed to champion and pursue a Yoruba agenda while the latter was thinly dominated by the northerners.

The mere fact that the AD and the ANPP teamed up to present a common candidate in the person of Chief Olu Falae against Chief Olusegun Obasanjo, the candidate of the PDP has further buttressed this fact.

Today, the party is enmeshed in a crisis that if not resolved, could affect the fortunes of the party in the 2023 presidential election. At the centre of the crisis is the person of former Senate President, Dr. Iyorchia Ayu, who is currently the National Chairman of the main opposition party, the PDP.

Timothy Osadolor, the deputy national leader of the PDP, was blunt in an interview he granted The Punch, when he said: “The People’s Democratic Party needs the five aggrieved governors, led by Nyesom Wike, and that though the party could run without them but this could be difficult” it is pertinent to state that with the current trend of events where Governor Wike has started endorsing Lagos Governor Babajide Sanwo-Olu for a second term, it could be very difficult for the PDP to win the 2023 presidential election without the aggrieved governors known as ‘G5’.

Everybody must be carried along. I will therefore candidly advise the Tiv academician, thoroughly blended in political science, to voluntarily tender his resignation forthwith, if he loves Atiku Abubakar, a veteran contender to the office of President, Federal Republic of Nigeria.

If he heeds this advice he will knowingly or unknowingly be positioning Atiku at the entrance of Aso rock Villa before the ballot, because Nigerians are tired of the inept APC government led by President Muhammadu Buhari. Governor Nyesom Wike should thereafter also bury his ego, join the PDP Presidential Campaign Council and work Atiku to success instead of destroying the party he claimed to have jointly built and sustained.

He (Wike) should also as a leading light in this crisis and its solution, desist from dragging Ayu’s family into the party’s debacle.

The yearning and aspiration of the aggrieved G5 governors could also be boosted by screening competent candidates with proven track record like the acting Chairman, Board of trustees, Senator Adolphus Wabara, from the South-East, and the level- headed but highly cerebral, non-nomadic politician, who has never jumped the ship since he teamed up with the party about 20 years ago, former PDP National Secretary, Professor Wale Oladipo from the South-West as National Chairman.

“It is pertinent to state that with the current trend of events where Governor Wike has started endorsing Lagos Governor Babajide Sanwo-Olu for a second term, it could be very difficult for the PDP to win the 2023 presidential election without the aggrieved governors known as ‘G5’”

It is also by doing so that the Emi lo kan and Awa lo kan syndrome (i.e. it is my turn or our turn) which is and will further overheat the polity, snowballing into political crisis could be curtailed. If the turn by turn syndrome is to be seriously espoused for fairness, equity and ethnic balancing, Peter Obi, the presidential candidate of the Labour Party from the South-East is supposed to be clamouring for it.

Those who believe in this school of thought and are seriously rooting for it are the nonagenarian Afenifere leader, Chief Ayo Adebayo and ex-president Olusegun Obasanjo. But unfortunately for Obi, his Labour party structure cannot earn him the presidency, at least not in 2023. Simplicita.

I remember meeting Peter Obi in Lagos several times. There was a day I almost ran into the duo of Obi in the company of former Biafra warlord, Ikemba Nnewi, Chukwemeka Odimegwu Ojukwu at the Federal Palace Hotel on Ahmadu Bello Way Victoria Island, Lagos.

As they were about to board an in-house elevator in the hotel, when Obi realized that I was looking at him adoringly, he pointed to a copy of the speech delivered and yelled at me. He might have perhaps felt that I wanted to interview him because I had interviewed former Head of state, General Yakubu Gowon, and the late Gambian President Sir Dauda Jawara before, without booking any appointment. Frankly speaking, I was impressed by his simplicity.

It was this attribute coupled with his grasp of the nation’s economy that propelled Atiku Abubakar to nominate him as running-mate in 2019. He should therefore look for a way of re-aligning with his former boss, even at the eleventh hour, in the interest of the Igbo speaking people of Nigeria. This is because he has to choose between the eight years of Atiku’s tenure or the sixteen years of Tinubu’s presidency before an Igbo man could aspire to be president.

Frankly speaking, Nigerians will not be in a hurry to trust a typical Igbo man with the presidency now, because the Biafran mentality could easily resonate in their head and push for a break-up idea.

On the other hand, political analysts have expressed the feelings that electing an Igbo man could also eliminate the break-up idea.

The wound of the Nigerian civil war has not totally healed, while the scar is still conspicuously visible. We don’t want another civil war from ‘Emi lo kan’ (It’s my turn) syndrome.

Given this circumstance Atiku Abubakar has become the child of necessity, and Governor Nyesom Wike should allow the PDP train to overrun Nigeria just as Senator Demola Adeleke overran Osun State.