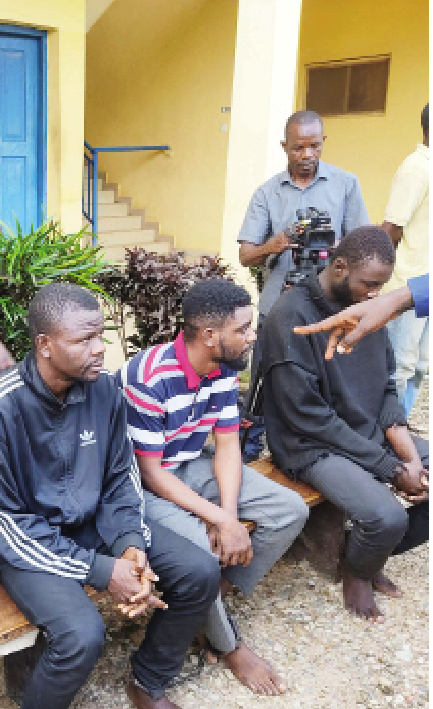 Two artisans, Patrick Asuquo and Bisi Oyerinde, who were arrested by men of the Osun State Police Command over alleged serial shop and house breaking, have blamed their actions on poor returns on their ventures.

Asuquo and Oyerinde, in an interview with The Point at the police headquarters in Osogbo, claimed that they engaged in horticulture and barbing respectively.

They, however, claimed that they took to stealing due to poor patronage.

The two suspects were arrested for allegedly breaking into some shops and a house in the town, carting away several items. They claimed that they intended to sell the stolen items with the aim of raising funds to venture into other trade.

Oyerinde said, “I am a barber in Osogbo. It’s true that I broke into some shops with Patrick. This is the devil’s work because I never stole before. This is my first time and it was because my barbing business was not moving well. I needed money to venture into another business.”

Asuquo also said that his horticulture business was not moving well.

He explained, “My intention was to change my business after raising some money. I regret stealing.”

The police arraigned the two robbery suspects before an Osogbo Magistrate’s Court on 10 counts bordering on conspiracy, shop and house breaking, attempted felony, stealing and jailbreak.

Police prosecutor, ASP Abiodun Fagboyinbo, informed the court that Asuquo and Oyerinde, aged 20 and 29 years respectively, broke into one house and three shops where they carted away several items.

They were arrested and detained at the Dada Estate Police Station in Osogbo for the alleged offence.

Oyerinde told the court that Asuquo, on December 31, 2022, at about 10am, escaped from the police custody but was rearrested by some policemen at the station gate.

Asuquo was alleged of being involved in jail break contrary to and punishable under Section 135 of the Criminal Code, Cap 34, Volume II Laws of Osun State, Nigeria, 2002.

The charge preferred against the duo read that “You, Asuquo Patrick and Oyerinde Bisi, and others at large, on the 15th day of December, 2022 at Peter Ajibola Street, Osogbo in the Osogbo Magisterial district, did conspire to commit felony wit shop breaking and stealing.

However, the two denied the allegation that they stole the said items.

The charge further read that “On the 12th December, 2022 at Ajigbotoluwa area Osogbo, (the duo) did break and enter into the shop of one Jimoh Iyabo with intent to commit felony. On the same day, time and place, (they) did steal (some bottles of) wine, beer and 6kg cooking gas, totaling N204.000, property of one Jimoh Iyabo.

“Asuquo Patrick and Oyerinde Bisi (makes), on the 14th day of December, 2022 at about 4am, at Peter Ajibola Street, Osogbo, did break and enter into the house of one Oyeniyi Timilehin with intent to commit felony. On the same day, time and place, (you) did steal 6kg gas cylinder, a home theater, an Infinix Smart three, a small Tecno phone, a power bank and the sum of N10,000 all total value at N95,000, property of one Oyeniyi Timileyin.”

They pleaded not guilty to counts eight and nine which read that on November 12, 2022 at about 4:10am at Alekuwodo area, Osogbo, they broke into the shop of one Oyeyemi Kemisola with intent to commit felony and stole assorted clothes, bags and shoes all valued at N250, 000, property of one Oyeniyi Kemisola.

They, however, pleaded guilty to other charges.

The prosecutor was unable to go into summary trial of the case because of the unavailability of exhibits in court.

He, therefore, urged the court to adjourn the matter to allow him prepare for the hearing.

The defence counsel, Tunbosun Oladipupo, did not object to the application for the adjournment of the case.

Magistrate A. K. Ajala adjourned the matter till January 31 for summary trial.

He asked the prosecutor to produce exhibits in court and ordered that the defendants be remanded at the Ilesa Correctional Centre.